A Look ahead – Coppélia 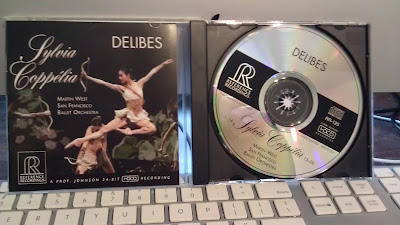 We are less than a month away from the release of Delibes: Sylvia/Coppélia featuring the San Francisco Ballet Orchestra under the direction of Martin West.

A little from the album’s liner notes about Coppélia…

In contrast to the “heroic” drama of gods and shepherds, Delibes’s earlier ballet Coppélia, or The Girl with Enamel Eyes, is an ingratiating comedy with a story line that was, and remains, unusually absorbing for its genre. Charles Nuitter, the archivist of the Paris Opéra, based his scenario on a story by E.T.A. Hoffmann called Der Sandmann, and his original working title was La Poupée de Nuremberg—which, however had been used for similarly based works by other composers. Like Tchaikovsky’s subsequent Hoffmann-derived Nutcracker, this tale combines warm-hearted everyday folk in a contemporary (for its time) setting with a certain level of other-worldly fantasy for spice. Simply stated, the village girl Swanilda is engaged to Frantz; he becomes dazzled by Coppélia, who tuns out to be a mechanical doll whose creator, the mysterious Dr. Coppélius, has been passing off as his daughter. Good-natured mischief sets the tone for this engaging drama, and its happy ending, while clearly foretold, is not less satisfying for all that.

And to really pique your interest, enjoy listening to this sample from the Mazurka!