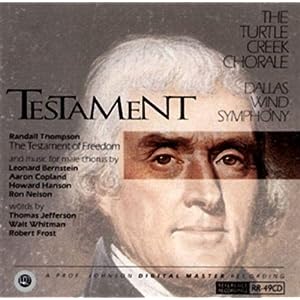 As a tribute for today’s holiday, we feature our album “Testament” and the Turtle Creek Chorale ensemble. While reading the liner notes you will find these songs speak the same sentiments of hope for our nation that Martin Luther King Jr. embodied in his life.

But what was the song he heard? A New England carol, a southern spiritual, an Appalachian melody, a cowboy ballad? Any or all of these could have been ringing in his ear, for America’s music has long been as diverse as its land and its people. Through the years, we have made room for and embraced such far-flung sounds as the barbed Yankee-isms of Charles Ives, the simple complexities of Aaron Copland, the urban blues of Leonard Bernstein, and the wit and whimsies of Cole Porter. But it is the lyric side of America’s music—songs of patriotism, reflection and praise—that Dallas’ superb Turtle Creek Chorale has chosen to celebrate in this recorded concert with the Dallas Wind Symphony. Copland is here, so is Bernstein. there is also music from two elder statesmen, Howard Hanson and Randall Thompson, plus a piece by Ron Nelson who carries their tradition. This is affirmative music, works that keep faith with the American dream at its most idealistic and with the political and poetic heroes who help give it shape. In Hanson’s Song of Democracy, Walt Whitman urges the nation to “Sail, sail thy best ship of Democracy! Of value is thy freight. ‘Tis not the Present only. The Past is also stored in thee.” Many of the same ideas resound in The Testament of Freedom through the rousing words of Thomas Jefferson: “The God who gave us life gave us liberty at the same time.”

Thompson also echoes Robert Frost’s joy in nature—the pasture in spring and a snowy wood at evening—while Copland speaks of “The promise of living with hope and thanksgiving” and celebrates, in his setting of an old Shaker hymn, “the gift to be simple…the gift to be free.”

And where Nelson admonishes us to “Behold man! God summoned yet God bound,” Bernstein brings us back to earth with the reminder that “We’re neither pure nor wise nor good; we’ll do the best we know. We’ll build our house and chop our wood, and make our garden grow.” Of these five men, the youngest and the only one still alive is Ron Nelson (born 1929), while his teacher Howard Hanson is the oldest (1896). Randall Thompson (1899) was a contemporary of Hanson’s and taught Leonard Bernstein (1918). Aaron Copland (1900) was a friend to all of them, and especially a mentor to Bernstein. “Behold Man” was composed by Nelson in 1961 to words by Albert D. van Nostrand, and is dedicated to the Brown University Glee Club. It was at the famed Eastman School of Music that Nelson studied with Hanson, who remained its director for over forty years. Of Scandinavian descent, Hanson often cited Sibelius and Grieg as strong influences on his writing, and even in so vivid a piece of Americana as “Song of Democracy” you can feel a powerful Nordic undertow. His setting of Whitman’s paean to liberty was written to mark the 100th anniversary of the National Education Association and the 50th of the Music Educators National Conference.

The Testament of Freedom was composed by Randall Thompson in 1943 to honor the two-hundredth anniversary of the birth of Jefferson and became one of his most popular works. Gilbert Chase, a major chronicler of America’s music, has written that in this work, “the composer deliberately set himself to write a type of ‘public music’ that would…possess a dignified grandeur arising from simplicity of means. Hence, the writing is predominately in unison, stressing directness of expression and clarity of projection of the text.” Yet for all the attention Thompson received from The Testament of Freedom, his name has been kept alive most by his exquisite “Alleluia.” This bedrock of contemporary choral literature was commissioned by the former music director of the Boston Symphony, Serge Koussevitzky, for the inauguration of the Berkshire Music Center in 1940. But lovely and worth knowing as well is Thompson’s choral cycle Frostiana, a setting of seven of Frost’s most admired poems. The Turtle Creek Chorale performs the two that were written for male voices—“The Pasture,” with its lovely recurring invitation “You come too,” and the famous “Stopping by Woods on a Snowy Evening.” Copland’s “The Promise of Living” is drawn from his only opera The Tender Land, written in 1954 on a commission from Richard Rogers and Oscar Hammerstein II to commemorate the thirtieth anniversary of the League of Composers. Set in the 1930’s (to words by Horace Everett), it tells the story of the life and times of a Midwestern farm family and the sense of continuity that cements their lives. The traditional Shaker melody “Simple Gifts” was given new life by Copland when he added it to his landmark ballet Appalachian Spring, written for the Martha Graham Dance Company in 1944. The American composer Irving Fine made the choral arrangement performed here in 1952, and a few years later Copland included the lilting tune in his collection of “Old American Songs.” “Make Our Garden Grow,” from Bernstein’s operetta Candide, has become not only a Broadway, but an American anthem. Its stirring phrases, like those of Copland’s “The Promise of Living,” rejoice in the land and in a life spent in simple pleasures: “Let dreamers dream what world they please; those Edens can’t be found. The sweetest flowers, the fairest trees, are grown on solid ground.”

Find “Testament” on ReferenceRecordings.com
For more information on the Turtle Creek Chorale, please visit their website.

3. The Pasture (2:26)
Music by Randall Thompson
Text: from Frostiana by Robert Frost

4. Stopping by Woods on a Snowy Evening (4:55)
Music by Randall Thompson
Text from Frostiana by Robert Frost

6. The Promise of Living (5:03)
Music by Aaron Copland
Text by Horace Everett from The Tender Land