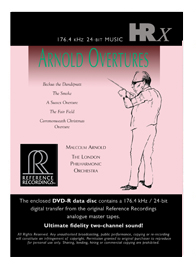 John Sunier of Audiophile Audition takes a look at the HRx version of the Malcolm Arnold: Overtures recording, and compares it to other formats we’ve released in the past.

“This may be the current No. 1 audiophile classical album today, in a similar place as were the Sheffield albums of Wagner and Prokofiev back in direct-to-disc days…

“This was a different sort of comparison than I’ve ever done before: the standard CD vs. the vinyl double album vs. the HRx WAV 176.4K audio files. Of course both of the hi-res album were a huge improvement over the standard 44.1K/15-bit CD…

“Arnold has long been one of my favorite British composers, and he was always known for being an excellent conductor of his own music. So in this album we have the best combination imaginable. He’s a master of orchestration; started out as a trumpet player in the symphony. He likes extremes of dynamics—sure to please audiophiles. You never really know what’s coming up next…” — John Sunier, Audiophile Audition

Read the full feature on AudAud.com