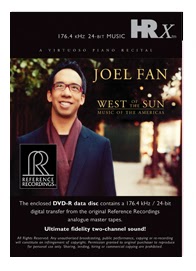 Blu-rayDefinition.com has a great review for the Joel Fan West of the Sun: Music of the Americas recording as an HRx Download:

“…we simply get one of the best, most natural sounding piano recordings that I have ever heard. The image is dead center and the location of treble and bass are revealed as you would hear them in a live concert. This music frequently sings and the piano’s voice, a most difficult one for sound engineers to capture properly, is caught perfectly… Try as I could, I heard no obvious or reproducible differences between the WAV and FLAC versions during repeated listening comparisons.

“Another “five-disc” award? In this case, if my editor Brandon DuHamel would allow me to award six of them, this recording would definitely deserve them. The program is innovative and presents the great range of Western Hemisphere music by some of the best composers you may never have heard of. Best of all, Fan’s incredible virtuosity is delivered in ne ultra plus sonics by Johnson and company. West of the Sun is not only a must have download currently available from Acoustic Sounds, but will end up certainly on my list of best hi-res downloads of the year.” —Lawrence Devoe, Blu-RayDefinition

Read the full review at www.Blu-RayDefinition.com!