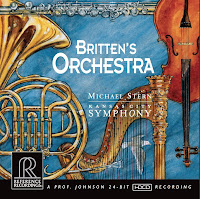 The Young Person’s Guide to the Orchestra is a symphonic tour-de-force and audio spectacular, featuring all sections of the symphony, separately and together. Based on a famous theme by Henry Purcell, Britten writes in essence his “Concerto for Orchestra,” taking the ensemble apart, then reassembling it in a grand and jubilant finale. Dynamic range is extreme.

Britten was a dedicated pacifist, and the Sinfonia da requiem from 1940 is his musical plea for peace. It begins with stark and dramatic drumbeats that will be a test for even the finest sound systems, and builds to tremendous climaxes. This early work is regarded by many as the finest of all his orchestral scores.

Peter Grimes, Britten’s most popular opera, is heard most often in the orchestral Sea Interludes and Passacaglia, some of his most haunting and atmospheric orchestral music. “Prof.” Johnson’s transparent sonics allow one to “hear into” all these scores as never before.

Perhaps the most striking aspect of this new recording is the exceptional performance by Michael Stern and the Kansas City Symphony. RR has made many fine orchestral recordings, and we feel that this is one of our very best.

This new release was produced by four-time Grammy Award winner David Frost. Frost says he is honored to work with engineer Keith Johnson for the first time, and is full of enthusiasm for the sound quality of the masters.