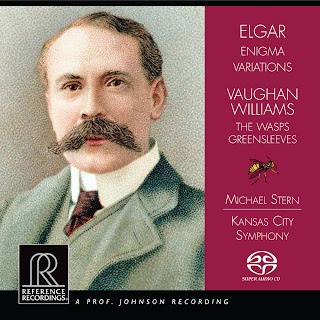 Barry Forshaw raved about the Kansas City Symphony Elgar/Vaughan Williams recording when it was first released. Now he has a second review of the recording after hearing the new SACD version:

“…this writer was so impressed by the performance and sound quality of this cherishable disc in its CD version that I contacted Reference Recordings with my one caveat: that the disc was not afforded the company’s inestimable SACD spruce-up. And here, after some delay, is the answer to my wish, proving to be quite as remarkable as one might expect: just try the overture to Vaughan Williams’ The Wasps or the finale to the Enigma Variations to see what the SACD medium is capable of in the hands of a company that is fully aware of its capabilities.” —Barry Forshaw, Classical CD Choice

Read the full review at cdchoice.co.uk!