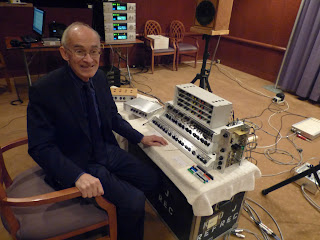 It’s easy to think making a recording is a passive process. You set up a microphone or aim a cell phone, press “record,” and voila! You’ve captured a song to listen to, enjoy, save and share.

When Keith O. Johnson makes a recording, however, it is not a passive operation. Johnson’s process involves hours of equipment set up, patient listening and dynamic reaction to performances in real time. The process is intense and time-consuming – and well worth every minute. Johnson, 75 and called “Professor,” is a legend in recording and audiophile circles. He is technical director and recording engineer at Reference Recordings, and over more than 50 years in the business his albums consistently set the standard for high-fidelity sound. Johnson has engineered 150 classical and jazz albums. He won a Grammy in 2010 for Best Surround Sound Album and has received seven Grammy nominations for Best Engineering, Classical. His recordings have won 3 other Grammys and numerous industry awards.

Johnson and his colleague Sean Martin were at the Meyerson in February to record the Dallas Symphony’s performances of Mahler’s Sixth Symphony. They set up a recording studio in the Green Room backstage and placed sets of microphones around the stage. His self-designed and homemade pre-amps and mixing console captured every note of the week’s rehearsals and four performances of Mahler’s Sixth Symphony conducted by Music Director Jaap van Zweden. The resulting recording – the fifth by Maestro van Zweden and the DSO on the DSO Live label – will be released this summer and distributed internationally on CD and download by Naxos.

Johnson’s work is well known to some in Dallas through 25 recordings he’s made with the Dallas Wind Symphony and Turtle Creek Chorale, beginning around 1992. (Those CDs bear the label “A Prof. Johnson Recording” across their covers.) Mahler’s Sixth Symphony will be his first recording with the Dallas Symphony.

After rehearsal one February afternoon, Chris Shull spoke with Johnson about his recording techniques, and what makes his CDs special.

Is your goal to capture exactly what a live performance by the Dallas Symphony sounds like?

We’re looking to capture a very good experience. In other words, when you put the recording on you capture the essence of the orchestra, the size of the stage and the dimensional acoustic of the performance hall, and a sense of being there. These support the performance, creating emotional connections and ultimately involvement with the performance. We want to create accurate imaging of the placement of instruments and stage, along with balance of sound (though that is of somewhat lower priority in my experience) and of course we want to avoid technical distractions.

In the blended sound of a full orchestra, can you hear individual instruments stand out?

There is something I describe as a “visual acoustic.” In the concert we see a guy with a trumpet, we see the violinist doing something, and our brain locks into that image and says, “I know what that instrument sounds like and it’s coming from over there.” The conductor will do his movements in control of the orchestra, and the mind processes seeing that along with the entire concert-going awareness. All of this creates or augments what you experience and feel when listening to the work. As a recording engineer, I’m blindfolded – all I have is a pair of speakers and two wires. So I want to capture and recreate as much of the visual acoustic as I can. I have to paint a picture, as it were.

How do you begin to paint a sound picture of Mahler’s Sixth Symphony?

I memorized the score. I couldn’t possibly flip the pages fast enough and manipulate everything. I spend a lot of time with that – learn the score, listen to the piece on many different recordings, get an idea of what it’s about, then try to remember what’s going on.

I spend a lot of time listening to rehearsal, and listening to the Maestro. He’s giving calls to the orchestra – play this louder, more grab here, more something there. I can manipulate at this end and achieve some of these things he wants. I can do a few little moves that can give the orchestra extra leverage, basically. If many tracks were recorded, it may be possible to do some of this with simple mixing. But because emotions and feeling are happening during a performance it’s better to do it right when it’s happening.

So as the performance is going on, you are actively tweaking mic levels, bringing some up, shutting others down?

It’s like playing an instrument. I listen to every rehearsal to learn how all of the microphones interact and which ones can focus, create big sonics or best preserve the beauty of sound and instruments. Then I learn the orchestra, conductor, hall and the technical moves or mixes that will favor what the composer had in mind.

I have a rule that is absolutely essential: I have very few microphones on at a time. I have all these microphones out on stage, but most of the time they’re not on. Or they’re feathering; they’re barely cracked open and you really don’t hear them. So what I’m doing is following what’s happening in the performance, and bringing up a pair of microphones here and a pair there. If there’s brass, I might only open brass and strings mics and feather the woodwinds. This move will give articulation and solidity. If the brass is starting to overpower the strings, at that point the microphones related to percussion and woodwinds are probably not going to be on. There’s no reason to have those things which are only going to cloud up the sound image. What I’m kind of known for is the ability to have detail going on, and that’s how it happens. You can’t have all these microphones on the stage all picking up the sound at the same time. They shouldn’t be too close to the instruments either or the soundstage becomes small.

This set up was designed specifically for recording an orchestra. The simplicity of these things is important. An audiophile wants the least amount of stuff in the paths from microphones to the digital recorder that ultimately produces the master file. There’s a minimum of equipment and it is far more precise than anything you can buy. We are using less and making it work so we don’t have interferences and so forth.

On stage, there are pre-amplifiers, a bunch of little boxes. Each box operates a stereo pair of microphones matched exactly to the instruments they are going to be used for. Normally on a mixing console you have everything the same and you have lots of controls and you tweak the controls. In this case, each box has been specially made for a specific function. Strings boxes have a little less high frequency push, and are more mellow in character. Woodwinds tend to be lighter, airy. Percussion wants to be very tight, laser-like. Microphones are calibrated so each pre-amp has a specific way of being.

So if I’ve got all these signals presorted by their tonal character, then I don’t need to have a fancy console with a whole bunch of knobs. I’ve got it already presorted. Then the levels are set up so if I turn all the controls halfway up, I’ve got what I want.

When did you know you wanted to be a recording engineer?

I love music. I love to make time capsules. In grade school I made a lacquer record recorder from a kit, using my erector set and a table radio to drive a magnet and a phonograph needle stuck on it. It worked! I cut my first record, just a radio broadcast. The lacquer was this gelatinous stuff you put on a piece of cardboard, so when the stylus wiggled it made a groove and you could play it back. I eventually made a serious three channel machine in high school. In fact, a recording from that machine is still in our Reference Recordings catalogue. [Jazz vibraphonist] Red Norvo The Forward Look was made on that machine that I built when I was in high school.