Here is another great review from Minnesota Public Radio that includes the audio. This time the review is of the Dallas Wind Symphony’s album Lincolnshire Posy: Music for Wind Band by Percy Grainger. We hope you enjoy. 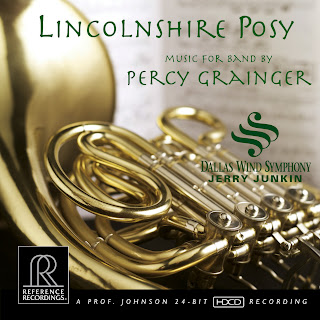 Percy Grainger’s compositions are mainstays of college and high school band concerts, but on this new release they’re given loving treatment by a professional group intent on restoring Grainger’s original sound and instrumentation.

St. Paul, Minn. — Percy Grainger’s personal philosophy when it came to the scoring of his music was, “the more, the merrier!” He loved doubling up players on a part.

Even so, he recognized the constraints of small community bands, of underfunded high school bands and the like, and advised anyone who would listen that his music could be rearranged or slimmed down at will.

But in this new release of Grainger’s music, the Dallas Wind Symphony and conductor Jerry Junkin wanted to be as true as possible to the original vision he held when he created his classics for band.

What this meant was reconstructing Grainger’s original orchestration. Sometimes it was just as easy as adding an extra saxophone on this line or that. But in some cases, it involved tracking down instruments that aren’t made any more.

It was eBay to the rescue in order to find — and then restore — a 90-year-old set of song bells. You can hear them at the end of Lincolnshire Posy.

The pleasant, happy-go-lucky, totally hummable nature of Grainger’s music belies how experimental he was.

Here’s a guy who — at the age of 12 — envisioned eliminating rhythm and pitch from music, who created any number of very modern instruments, including a precursor of the synthesizer, and who was all over the technique of playing the piano from the inside several years before Henry Cowell coined the term “string piano” in the 1920s.

Listen for the sound of piano strings being struck by a percussionist’s mallet in Grainger’s “Children’s March.”

In addition to being at the forefront of experimental music-making, Grainger was also something of a visionary when it came to the band itself, creating music that lifted winds and percussion off the parade grounds and onto the concert stage.

That vision is something shared by the Dallas Wind Symphony. The group was formed in 1985 by Kim Campbell and Howard Dunn, a couple of guys who just wanted to take advantage of the great musicianship laying idle in the form of all these people who played in bands in high school and college, but didn’t have a professional outlet after graduation.

It’s one of only a handful of professional wind bands in the United States, and it turned Dallas, Texas, into a sort of Mecca for bands. There are more windbands there per capita than anywhere else in the world.

I read one quote about the Dallas Wind Symphony that really seemed to sum it all up. More or less, it said they have all the finesse and polish and flash of a professional group, but they still have the unrestrained enthusiasm of amateur players — folks who play because they love to make music. It sure sounds like they loved making this music.