Delibes: Sylvia and Coppelia featured on The Huffington Post

Big thanks to reviewer Laurence Vittes for submitting his review of Delibes: Sylvia and Coppélia to The Huffington Post to be featured in their “Haiku Reviews” section! 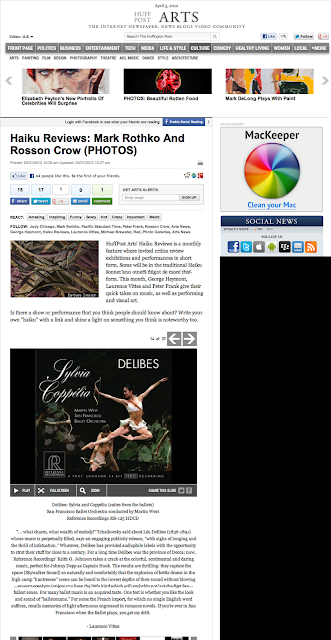 About the HuffPost Arts’ Haiku Reviews:

HuffPost Arts’ Haiku Reviews is a monthly feature where invited critics review exhibitions and performances in short form. Some will be in the traditional Haiku form of 5x7x5 syllables, others might be a sonnet and others might be more free-form. This month, George Heymont, Laurence Vittes and Peter Frank give their quick takes on music, as well as performing and visual art.


Listen to the Sylvia/Coppélia Sample Pack on RR Radio: