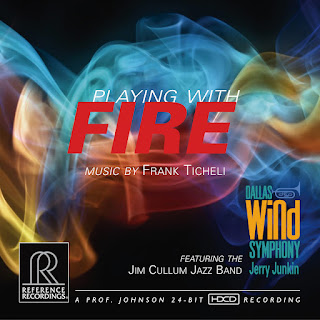 Host of radio program Wind & Rhythm, Doug Brown, has been kind enough to share the opening transcript from this weekend’s program, which highlights our newest Dallas Wind Symphony release Playing With Fire: Music by Frank Ticheli:

“Near the end of the summer of 2011, some of my best friends… just about all of them, gathered to create two new works of art. The scene was the great Meyerson Performance Hall in Dallas. Artistic Director Jerry Junkin had prepared the event with all of the style and amazing attention to detail that is his hallmark and the Dallas Wind Symphony was ready. The team from Reference Recordings was set up and prepared for some intense recording sessions, Executive Director Kim Campbell and the staff of the band had everything under control… and… as special guests, much of the staff of Wind and Rhythm was there too. We didn’t bring musical instruments, we brought cameras to do some proof of concept video recordings.

This week, here at the gathering place for people who love band music we’ll give you a first listen to the new CD that will be released next week. This is Wind and Rhythm, I’m Doug Brown and as we hear this great music, I’ll give you some idea of what it takes to do this kind of work.

All of the music on our show this week has been composed by Frank Ticheli and as our show continues I’ll have more to say about him, but let’s get started. I know you want to hear what we heard at that recording session. We start with a piece written in 1991 which has a great story. The music honors the life of a very feisty, vivacious, whimsical and succinct woman. Frank Ticheli and the Dallas Wind Symphony tell you her story…” — Wind & Rhythm, Episode 205

Ways to tune in:

The program is broadcast over the air and is also available as a live stream on the internet at the same time. Check your stations for streaming details. All times listed Central Time Zone.

Or, you can check their website for streaming instructions: www.windandrhythm.com