Doug MacLeod There’s A Time the Stereophile May Recording of the Month! 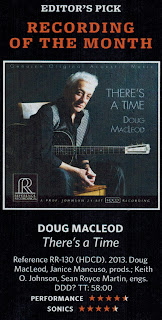 “His original music, which is what he’s documented in the 12 tracks of this warm, alive, natural, very well-recorded 24-bit HDCD collection…works in wise and pleasurable ways…Though he’s probably best known as a canny, nimble acoustic blues guitarist, MacLeod’s voice, with its prominent crying tone and agile phrasing, is the equal of his string jiggering…his singing is every bit as artistic as his instrumental prowess…MacLeod’s art is a quiet, mostly solo-led pursuit of finely detailed song-stories, impeccable playing, impassioned singing, and his engaging personality shines forth in a live setting. It all makes for a very enjoyable if very traditional experience.” — Robert Baird, Stereophile

Look for the full review online at the end of the month at www.stereophile.com!

Get There’s A Time as an HRx 176kHz/24bit download at HDtracks.com!

Or order direct from ReferenceRecordings.com