With our new recording of Jerry Junkin leading The University of Texas Wind Ensemble, Wine Dark Sea available for pre-order on Amazon, here’s a Friday Flashback to our previous release from this combination: 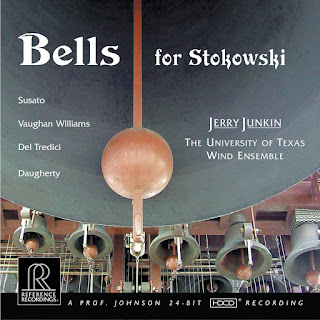 Nine delightful Renaissance dances by Tielman Susato start this program with a bang. The ever-popular English Folksong Suite by Ralph Vaughan Williams in its original scoring continues the crowd-pleasing mood. Two important new works follow. David Del Tredici’s first composition for wind band, In Wartime, is based on the popular hymn “Abide With Me” and the Persian national anthem. Michael Daugherty is one of the most performed and commissioned American composers of his generation. Bells for Stokowski is a fantasy in which the composer imagines Leopold Stokowski in Philadelphia, hearing all the bells of the city resonate. It’s a sonic spectacular, captured to perfection by “Prof.” Johnson in his most dazzling HDCD sound.