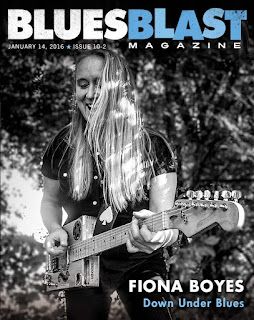 Box & Dice artist Fiona Boyes is on the cover of the latest issue of Blues Blast Magazine!

I love it when an “authentic” blues artist forces the blues police to re-adjust their judgment on the validity of that artist’s work even though that artist’s back story doesn’t fit the cliché of who a “real” blues artist should be.
Fiona Boyes is a blonde Australian woman of Scottish descent who never heard a lick of blues until she was in college. When she did pick up on it, it took her several years as a graphic designer before she began playing it on guitar, and – unlike most white blues guitarists who get hooked on the genre after hearing Jimi, Eric, or Keith – her entre was pre-war acoustic blues she heard on Paul Oliver’s History of Blues Volumes I and II. Add to that, she’s married to an Anglican priest and puts her tongue firmly in cheek when she says, “I play the devil’s music. Thus, we keep the whole universe in balance.”

Boyes was already 44 when she made her first foray to Memphis representing the Melbourne Blues Society in the International Blues Challenge in 2003. She won that contest in the acoustic division and in short order began meeting many of the seminal “precious” artists whose recordings had influenced her to become a blues guitarist in the first place. …

Read the interview in the latest issue of Blues Blast Magazine!

Order from RR!
Order on Amazon.com
Listen on Apple Music
Listen on Spotify