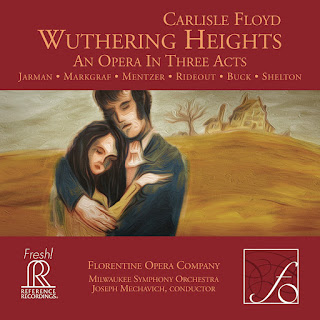 “For much of the work Floyd writes in an expressive parlando style that allows the words to be clearly heard even when the voices are competing with large orchestral forces. The dark brooding orchestral score is, even allowing for the tragic nature of the story, mellifluous and often lushly romantic in the style of Puccini and Samuel Barber as, for example, in Edgar’s aria “Then marry me Cathy and make me whole again” (Act 2 Scene 2 ) ardently delivered by tenor Vale Rideout. Floyd’s confident handling of his orchestral palette and his ability to create atmosphere is clear from the start where the doleful horns that open the work immediately capture the bleakness of the North Yorkshire moor setting.

It would be hard to imagine a more committed and much better sung performance than that given here by the Florentine Opera Company, one that has the imprimatur of the composer. The casting of the principal roles is very strong and led by the the soprano Georgia Jarman as Cathy and the baritone Kelly Markgraf as Heathcliff. Jarman’s gleaming soprano has the power to ride over the orchestra when required, but she can also sing with great tenderness and her impassioned portrayal of the opera’s tragic heroine is wonderfully expressive throughout. Kelly Markgraf is a commanding and virile sounding Heathcliff whose rhapsodic account of “Was there ever another place in all the world like this!” (Act 1 Scene1) makes him the epitome of the romantic hero. The singers of the supporting roles generally don’t disappoint, with Susanne Mentzer (Nelly) and Heather Buck (Isabella) worthy of special mention. The Milwaukee Symphony Orchestra, firmly directed by Joseph Mechavich, does full justice to Floyd’s dramatic score with responsive and vibrant playing sumptuously recorded.” —Graham Williams, HR Audio

Read the full review on www.hraudio.net