Is Box and Dice Fiona Boyes’ Best Yet? 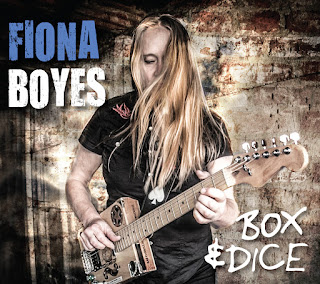 “Ever since she won the solo acoustic category in the International Blues Challenge of 2003 (the first woman and the first Australian to do so) Fiona Boyes has been as unstoppable as a wild fire. She’s won more awards and accolades than you can shake a guitar at and she gathers more fans with each new release. The release at hand will likely bring even more into the fray. … Outside of three wonderful covers, these are all new and original songs meant to showcase her talents on each guitar. That talent is abundant in this collection. Boyes is a maestro who writes clever material, plays the heck out of the guitar and has an attention-getting rough vocal prowess that captivates. … It’s a given that the guitar playing will never be less than awesome. Boyes is about telling the story – whether lyrically or with her guitar. … As a fan I can say that this may well be the best thing she’s ever recorded. It sure works for these ears.” —Mark E. Gallo, Big City Blues

See the full review on the Big City Blues site