The following is a review from the San Francisco Classical Voice, it can be found in it’s original form by clicking here. Or just continue to read on:

Joel Fan can be described in any number of ways. He’s a brilliant pianist who made his performing debut with the New York Philharmonic at age 11. He’s an artist who has won praise for his technical expertise, lyrical playing, and outstanding interpretation.

He’s stood out both as a solo performer and as a member of Yo Yo Ma’s Silk Road Ensemble. Most of all, he’s exciting and fun, capturing the ears of classical music lovers as well as more-casual listeners. 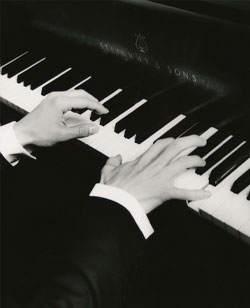 Fan’s concerts and recordings blend traditional repertoire with contemporary and world music. Not only does he bridge the gaps between all three, but his commitment to performing world music in a classical music setting makes him stand out.In his words, “I think contemporary music is so important to keeping what we do alive; I am totally committed to doing new music. That being said, I would say that being somewhat ‘audience accessible’ is a key factor, while also pushing boundaries of what’s possible. At least, that’s what I look for in the contemporary pieces I play.” His debut solo recording, World Keys: Virtuoso Piano Music, features music from, literally, around the world and rose to the top of the Billboard Classical Music charts.

Concertgoers in the Bay Area will have a chance to hear Fan’s eclectic approach and virtuoso style this month when he returns on September 18 as a part of the Old First Concerts series. The program includes three sonatas: Prokofiev’s Sonata No. 3 in A Minor: Allegro tempestoos; Chopin’s Sonata No. 2 in B-Flat Minor “Funeral March”; and Elliot Carter’s Piano Sonata (1. Maestoso, II. Andante-Allegro Giusto). The first two are familiar, but for those unfamiliar with the Carter sonata, Fan calls it one of the 20th century’s greatest works. Also on the program are two smaller works. A. Adnan Saygn’s Sketch on Aksak Rhythm is from Fan’s first release, World Keys. The second work is by William Bolcom—Nine New Bagatelles—written in 2006 and premiered on Fan’s second release, West of the Sun. Fan describes the latter two pieces as both humorous and accessible.