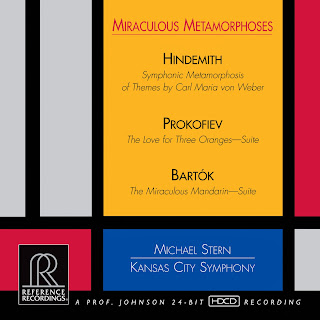 Kansas City critic, Don Clark, has a review for the new Kansas City Symphony Miraculous Metamorphoses recording on his Pictures on Silence blog:

“The program, titled ‘Miraculous Metamorphoses’, captures some of the best playing yet heard from the Symphony. The ensemble is crisp and visceral, lyrical when called upon combined with Stern’s trademark brisk yet not excessive tempi. Michael Stern’s very first concert as Music Director included a performance of the Hindemith “Metamorphosis” that wowed the audience. This one is even better with the orchestra’s now trademark sparkling winds, burnished brass and ringing, clean percussion. … The clarion horn calls over the chattering winds in the march finale are just breathtaking; simply one of those recording moments you just have to put on repeat and relish as long as you can. But do not linger too long, the mad rush to the climax is thrilling and powerful. … The Prokofiev ‘Love for Three Oranges Suite’ crackled with wit and snap. The whole set is brisk and fresh and the usual clear Reference Recordings sound highlighted the often clever wind and string detail to advantage. … this is a fine performance that would stand with my favorite Dorati/London or Marriner/London performances. … The violent and complex score of the Bartók “Miraculous Mandarin Suite” was breathtakingly realized by Stern and his forces aided by the stellar recording. … Performances that can stand with the best of them and sonics that sound fabulous even on my built-in computer speakers combine for another Reference Recordings/Kansas City Symphony ‘hit’.” —Don Clark

Read the full review on the Pictures on Silence blog!