First LP mastering of this work at 45 rpm! 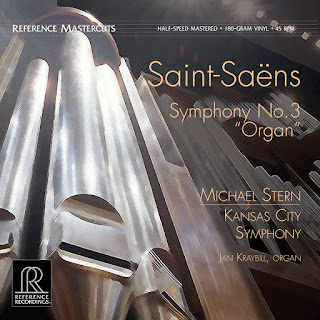 Composed at his artistic peak, Camille Saint-Saëns said of his Symphony No. 3 “I gave everything to it I was able to give. What I have here accomplished, I will never achieve again.”

The Symphony has released four previous titles with Reference Recordings to great acclaim — Shakespeare’s Tempest, the GRAMMY®-winning Britten’s Orchestra, an Elgar/Vaughan Williams project and most recently, Miraculous Metamorphoses, which highlights composers Hindemith, Prokofiev and Bartók. Two additional projects have been recorded and slated for future release, including the orchestral music of contemporary American composer Adam Schoenberg (recorded in June 2014) and Gustav Holst: The Planets and Ballet Music from The Perfect Fool (recorded in January 2015).