Looking back on Chihara: The Tempest 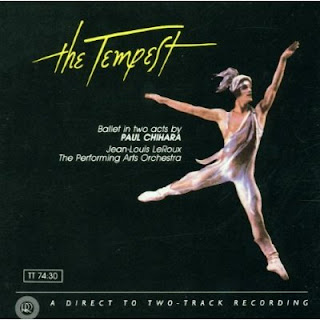 Earlier in the month, RR released a new recording of the ballet music of Delibes, featuring suites from the ballet’s Sylvia and Coppélia. But this was not the first release of ballet music from Reference Recordings. In fact, one of RR’s first releases featured the Paul Seiko Chihara’s score of The Tempest, which was premiered by the San Francisco Ballet in 1980 (the orchestra which appears on the new Sylvia/Coppélia release!), and recorded by The Performing Arts Orchestra conducted by Jean-Louis LeRoux for Reference Recordings in 1981.

The Tempest, an exquisite romance written in 1611, was Shakespeare’s last major work, his genius demonstrated in the play’s artful construction. Although the action is simple, it can be interpreted on many different levels. The author filled the script with more elaborate stage directions than he wrote for any other play, indicating that The Tempest was to be filled with music, and the marriage of the two lovers adorned with a formal masque, which must have pleased the audience at Blackfriars.

Much like the current RR release (Sylvia/Coppélia), The Tempest features many ideas of magic and adventure throughout it’s plot, and the whimsical nature of the music coincides. The Tempest was written by Shakespeare during the rule of King James I, who was a self-professed authority of demonology. His rule marked a point in which the public was steeped in matters supernatural, ranging from witchcraft to Greek gods and goddesses, and in the play, the leading character Prospero vows to “cast away his books and make magic no more.”

As an example, listen to the movement “Iris & The Rainbow Girls”

The score for The Tempest was composed by the prolific, award-winning Paul Seiko Chihara, during his 1980 composer-in-residency. You can find out more about Mr. Chihara, as well as information on his career since 1981 at http://pchihara.com.

Purchase this album securely from ReferenceRecordings.com or find hi-res downloads of the recording on HDtracks.com