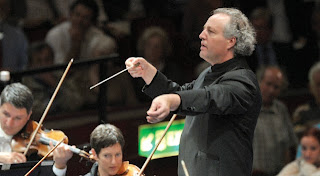 Pittsburgh Symphony Conductor, Manfred Honeck, was in Los Angeles over the weekend as guest conductor for the L.A. Philharmonic, and just as critics are raving over his Strauss performances, his latest performances received high praise:

“Honeck found a way, leaping into Dvorák’s ‘Carnival Overture’ as if to celebrate the hall’s existence with as boisterous and as exuberant a performance as you can imagine, getting a sharp response from the Phil on accents with sudden, swiping gestures. And it wasn’t all fireworks and heat, for Honeck made the lyrical sections flow for maximum contrast…

Most remarkable of all was Honeck’s transformative rendition of the well-worn Symphony No. 8 — slashing through the first movement with a coda on fire; trying out all kinds of strange, suspenseful ideas in the second movement; dancing, surging and ebbing through the third movement. Nothing was routine, every phrase was up for reexamination.

“From the first downbeat that leapt out of Maestro Honeck’s lithe presence on the podium, the orchestra responded with tremendous and brilliantly controlled phrases full of passionate intensity, immediately setting everyone on the edge of their seats. From the electrifying opening phrase the work continued with breathless intensity up to the last measure, when the audience went crazy with Bravos…” —Ahdda Shur, Examiner