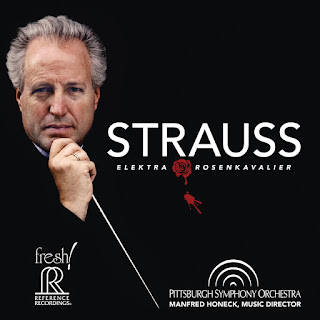 The Pittsburgh Tribune-Review and Pittsburgh Post-Gazette offer previews of what to expect in the new Pittsburgh Symphony recording of Suites from Richard Strauss operas with reviews from the ensemble’s performances of the works:

“The concert opened with Honeck’s ‘Elektra Suite,’ which the conductor created with Tomas Ille. Strauss’s opera is even more brutal, sensational and progressive in compositional style than his previous opera ‘Salome.’ His use of bitonality preceded Stravinsky’s in ‘Petrouchka’ by several years. The arrangement lasts just over half an hour and conjures an overwhelming, emotional world of love, betrayal and rage. Honeck and the orchestra gave full dimension to the music from ‘Elektra’ in vivid characterization, exceptionally powerful depth of sound and soaring, urgent lyricism.” —Mark Kanny, Pittsburgh Tribune-Review

“The orchestra brought a bit of ‘Don Juan’ to ‘Der Rosenkavalier’ with a boisterous beginning section to the suite from that opera.… Mr. Honeck brought out myriad colors in the varied takes on the dance. Gorgeous, lyrical middle sections set up the orchestra for the return of a dramatic waltz suspended on Mr. Honeck’s baton that in turn led to a dazzling ending. … The ‘Elektra’ was conceived by Mr. Honeck and orchestrated by composer Tomas Ille — no small task, given Strauss’ magnificent orchestration and huge orchestral writing for the opera. ‘Elektra’ provided a remarkable contrast with ‘Rosenkavalier,’ with the former’s dark character juxtaposing with the schmaltziness of the latter. With a full orchestral complement, the arrangement is heavy, and its dissonance drew me in. Dynamics throughout the spectrum — from thunderous tutti moments, to low brass and horns droning under cellos, to whispering violins — created a haunting, almost frightening character that contrasted with moments of beauty.” —Elizabeth Bloom, Pittsburgh Post-Gazette