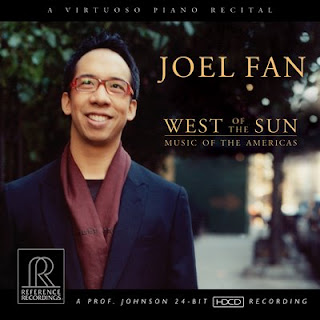 Once again, couldn’t help but share some of these reviews for this fantastic album!

Here is a review from The Star and they give the album 4 Stars (though not sure out of how many):

JOEL FAN West of the Sun (Reference): New Yorker Joel Fan will have managed to squeeze three decades of performance in by the time he turns 40 this summer. The frequent guest of Yo-Yo Ma’s Silk Road Ensemble won the New York Philarmonic’s young people’s auditions at age 11 and has never looked back. Here he offers nine stunningly brilliant renditions drawn from a wide range of styles and sources, from Brazilians Ernesto Nazareth and Heitor Villa-Lobos, Argentina’s Alberto Ginastera and Astor Piazzolla to Americans Amy Beach and Margaret Bonds. Capping it all off is an arresting interpretation of Samuel Barber’s fearsome 1949 Piano Sonata. Wow.

Here is a review from the San Francisco Classical Voice:

Pianist Joel Fan, a longtime member of Yo-Yo Ma’s genre-busting Silk Road Ensemble, has just released West of the Sun: Music of the Americas. Given Fan’s predilection for colorful repertoire, this new disc, his second CD on the Bay Area–based audiophile label Reference Recordings, is likely to follow his initial release, World Keys: Virtuoso Piano Music, to the top of the Billboard classical charts.

Born in New York City in 1969 to Taiwanese parents, Fan first performed with the New York Philharmonic at age 11. His subsequent musical education, which included the Juilliard School, Harvard University (where he studied with Leon Kirchner), and the Peabody Conservatory (where he studied with Leon Fleisher), led to prizes at the D’Angelo Young Artists International Competition in the U.S. and Busoni International Piano Competition in Italy.

Fan’s commitment to a wide range of repertoire leads him to easily traverse the distance between world music, classical music of the 21st century, and music by Schumann and Beethoven. Just last month, he presented the New York premiere of William Bolcom’s often-droll Nine New Bagatelles in a club setting as part of a CD release party for West of the Sun.

The shortest of Bolcom’s nine bagatelles, called (…take no prisoners), slayed this listener with 21 seconds of cheekiness. Bolcom’s babies are but one of nine works on a CD that starts off in a lighthearted dancing mood. First up is Brazilian Ernesto Nazareth’s Vem cá Branquinha, a snappy tango that lifted one of its themes from a tango popularized at Brazil’s 1906 Carnival. Alongside such equally short works as New Orleans–born Louis Moreau Gottschalk’s lighthearted Suis-moi! Caprice (1861), Argentinean-born but New York–raised Astor Piazzolla’s insinuating Flora’s Game (Milonga Prelude) (1987), Brazilian Heitor Villa-Lobos’ beautiful Chôros No. 5, “Alma Brasileira” (1925), Mrs. H.H.A. Beach’s darting Fireflies (1915) — not as sparkling as a fleeter recording by Alan Feinberg, though lovely nonetheless — and African-American Margaret Allison Richardson Bonds’ Troubled Water (1967), based on the Negro spiritual Wade in the Water, are the CD’s two most substantial works: Argentinean Alberto Ginastera’s compelling Sonata No. 1 (1952) and Samuel Barber’s stunning four-movement Piano Sonata, Op. 26 (1949).

Fan’s rendition of Barber’s technically challenging sonata, whose knockout last movement was written at the insistence of Vladimir Horowitz, is the performance by which most listeners will judge his achievement. He acquits himself wonderfully, even when compared to Horowitz and speed demon Marc-André Hamelin. The Adagio is especially touching, and becomes more moving with repeated listening. Fan also manages to play the hair-raising final Allegro one second faster than Horowitz and seven seconds faster than Hamelin, yet never sacrifices musical coherence for dazzle. This state-of-the-art recording makes me hope that Fan will soon return to the Bay Area, not only to record a third CD at Skywalker Studios, but also to perform a full-length recital.