Moritz Moskowski: The Man Behind the Mustache 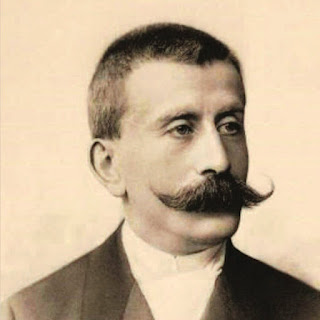 Moritz Moszkowski was born in what was then called Breslau on August 23, 1854. The Silesian city of Breslau, during its long history, has been part of the Kingdom of Poland, Bohemia, Hungary, the Austrian Empire, Prussia and Germany. Since 1945, due to the border changes after the Second World War, Breslau became part of Poland and is known now as Wroclaw. Along with his parents, Isaac Moszkowski and Salomia Moszkowski (born Hirschberg), and older brother Alexander (born January 15, 1851), the Moszkowski’s lived in Breslau for thirteen years in an apartment of five rooms and in modest financial conditions. Isaac Moszkowski placed great value on an education for his sons. Moritz and Alexander learned German, Latin and ancient Greek in school. Moszkowski began music studies at home. When the family moved to Dresden in 1865, music education for both Alexander and Moritz began in earnest. At the Dresden Conservatory, they studied piano with Julius Emil Leonhardt (1810-1833) and harmony with Wilhelm Albert Rischbieter (1834-1910). At the end of 1868 the family moved to Berlin, where Moritz attended the Stern Conservatory studying with Eduard Franck (1817-1893) and Friedrich Kiel (1821-1885). In search for greater challenges he transferred to the new Akademie der Tonkunst (founded in 1855), and began piano studies with Theodor Kullak (1818-1882), composition with Richard Wüerst (1824-1881) and orchestration with Heinrich Ludwig Egmont Dorn (1804-1892). In 1870 Kullak brought some of his most talented pupils to Liszt in Weimar, and Moszkowski performed for Liszt one of the composer’s Hungarian Rhapsodies.

Moszkowski proved to be an extraordinary pianist who toured extensively throughout Europe. His debut in Berlin at the age of 19 was stellar, prompting Franz Liszt to write admiringly of him. English pianist and critic, Frederick Kitchener, related that “the playing of Moszkowski was beautiful playing; there was no attempt to astonish…a musician, not an acrobat was at the piano.” According to the German-American pianist and composer Emil Liebling (1851-1914), “considered as a pianist, Moszkowski is hors de concours…Everything was done musically and with the utmost ease.” Highly influential as a teacher, Moszkowski taught at the Kullak Conservatory in Berlin and later in Paris (where his students included Gaby Casadesus (1901-1999) and Vlado Perlemuter (1904-2002)). Many Americans flocked to Europe to study with him. Illustrious musicians such as Joseph Hofmann, Wanda Landowska (1879-1959). Joaquin Turina (1882-1949), André Messager (1853-1029) and Thomas Beecham (1879-1961) were among his pupils. For a figure of such professional stature, his personal life in later years was less fortunate. After an unsuccessful marriage in 1884 to pianist Cecile Chaminade’s (1857-1944) sister, Louise Henriette Hippolyte Chaminade (1863-1900), Moszkowski had to raise his children by himself. For unknown reasons, she abandoned the marriage and her children in 1891—Henriette and Moritz were officially divorced in 1892. In 1897 Moszkowski moved to Paris with his two children, Sylvia (1889-1906) and Marcel (1887-1971). He lived there for the rest of his life. In 1906 Moszkowski’s sixteen-year-old daughter became seriously ill and died. At this time, Moszkowski’s own health declined. Marcel, Grieved by his sister’s loss, steadily grew apart from his father. On April 13, 1910 Moszkowski’s mother, Salomia died. As a tribute to her, Moszkowski wrote his Prelude and Fugue for String Orchestra, Opus 85. The work was premiered on December 17, 1910 in London, conducted by his former pupil, Thomas Beecham. Also in 1910, Moszkowski was honored with being named a Chevalier of the Legion d‘Honneur. In 1913 Marcel did military service in the French Army (fighting on the front in 1914). He eventually became a diplomat.

Moszkowski composed throughout his entire life, beginning with an orchestral Overture and his Symphony, written while he was a student in Berlin. In Paris, Moszkowski made sure his compositions were always properly registered at the Société des autuers, compositeurs et editeurs de musique (SACEM) and protected by copyright. However, during World War I, Moszkowski earned little in royalties, and countries such as America and Russia contributed virtually no payments, due to unfortunate loss of some of the copyrights to his compositions during World War I. By 1920, Moszkowski suffered from chronic depression and was diagnosed also with stomach or esophageal cancer. The complicated and costly operations performed did little good, and his health continued to deteriorate. Moszkowski’s horrible financial situation and his declining health prompted many musicians to send financial help. These dedicated friends, made it possible for Moszkowski to be more comfortable in his last years. Moszkowski succumbed to cancer on March 4, 1925 in Paris.

—Marina A. Ledin and Victor Ledin

San Francisco Ballet Orchestra music director and principal conductor, Martin West, approached Reference Recordings with the hope that there were enough orchestral works by Moritz Moszkowski to record a CD-length program. After identifying and locating numerous scores, this project of re-discovering the music of Moritz Moszkowski became a reality. Using From Foreign Lands as a starting point, we were able to assemble an intriguing program of, largely, first recordings of Moszkowski’s most memorable and melodious orchestral compositions. This delightful program is the San Francisco Ballet Orchestra’s fourth release with Reference Recordings and 2016 marks the 40th anniversary of the SF Ballet orchestra!