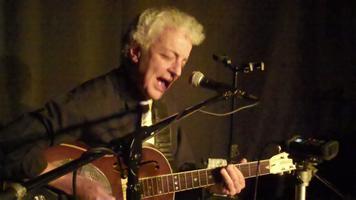 We just had to share this great review with you today:

“He is charming. He is funny. He is poignant. He spins yarns that make you feel you’re leaning on a rough wooden railing, in the heat of a Southern summer night, in some no-name little bar in the middle of no where.

He is a Blues Man.

“It’s hard, attending a MacLeod concert, to separate his music from the stories he spins while he is on stage. As he said in an earlier interview with The Leader, “blues is the true facts of life.” His stories reflect a life not always led on the straight and narrow, a life with some rocky edges to it. But the music grows out of this past. And there is the humour and wit of experience in what he says and sings.

“This Old River,” written for a friend of his who eventually lost her life to cancer, was simple, soft and deeply moving. “I went to see her when she knew she was dying. She was out in her backyard still planting trees and flowers. This woman who was gonna leave us so soon was planting life.”

It stood out in an evening of stand out music.

The enthusiastic audience attending the MacLeod concert knew they had been in the presence of one of the all time great Blues men.

“I never play the same song the same way twice,” Doug MacLeod told his listeners. “You Morrisburg folks are the only folks in the whole world hearing these songs exactly like this.”

What a privilege.” – The Leader