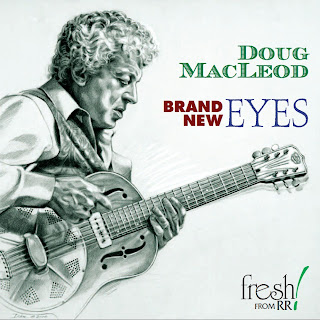 “MacLeod is one of the finest songwriters, storytellers and performers in the blues.” Sing Out!

*The original title was Some Old Blues Song, but when Bruce Iglauer of Alligator wanted to record it with Son Seals he preferred it to be called I Can Count On My Blues.

True blues. These two words define in style and commitment the acoustic music composed and played by Doug MacLeod, a singer- songwriter in the American tradition.

MacLeod has been a beacon of unquestionably honest roots-music since the 1970s. Proof enough: 16 albums, a couple of DVDs, and thousands of gigs stateside and overseas. And in December, the announcement by the Blues Foundation of his nomination for the 2011 Blues Music Award as Acoustic Artist of the Year.

On Brand New Eyes, MacLeod presents 11 original songs. In a genre often reliant on old standards, he is the rare traveling artist who writes and sings original songs that are based on his own life and experiences. He learned from the old masters, lived the music, survived the life and carries forward a valuable tradition. MacLeod is known for his superb songwriting, guitar wizardry, warm soulful vocals, wit and unforgettable live performances. At the heart of this is his knack for storytelling, bringing characters — from the faceless to the legendary — to strikingly real life.

From Frank-John Hadley’s liner notes: “The songs of Brand New Eyes are heavily streaked with altruism, a belief in the bracing power of music to heal. It’s the thread running through the cloth of all the material.” “I see so many people walking around and they don’t see anything good in the world,” MacLeod says of the title track. “But maybe it’s not the world, maybe it’s you. To see some good in the world, put on some brand new eyes.”