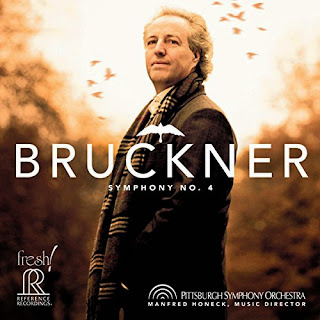 Anton Bruckner is known as a deeply religious composer whose Catholic spirituality is prominent in his music, particularly his later symphonies. However, his Symphony No. 4 in E-flat major (“Romantic”) is one of his most secular, most influenced by nature and most popular works. The Pittsburgh Symphony Orchestra and Music Director Manfred Honeck offer a bold new interpretation of this great music, breaking Bruckner out of the strictly interpreted box in which he is often placed. Here, the Pittsburgh Symphony Orchestra and Honeck present the 1878/80 version, the same version that was used for the symphony’s premiere in 1881.

This release is the third in the highly acclaimed “Pittsburgh Live!” series of multi-channel hybrid SACD releases on the FRESH! Series from Reference Recordings. The previous release, “Dvořák/Janaček” (FR-710SACD), has received a Grammy® nomination along with numerous critical accolades.

For more than 119 years, the Pittsburgh Symphony Orchestra has been known for its artistic excellence, a rich history of the world’s finest conductors and musicians, and a strong commitment to the Pittsburgh region and its citizens. Past music directors have included many of the greats, including Fritz Reiner (1938-1948), William Steinberg (1952-1976), Andre Previn (1976-1984), Lorin Maazel (1984-1996) and Mariss Jansons (1995-2004). This tradition of outstanding international music directors was furthered in fall 2008, when Austrian conductor Manfred Honeck became music director of the Pittsburgh Symphony.

This release and the entire “Pittsburgh Live!” series are recorded and mastered by the team at Soundmirror, whose outstanding orchestral, solo, opera and chamber recordings have received more than 70 Grammy nominations and awards! Soundmirror has recorded for every major classical record label, now including Reference Recordings.