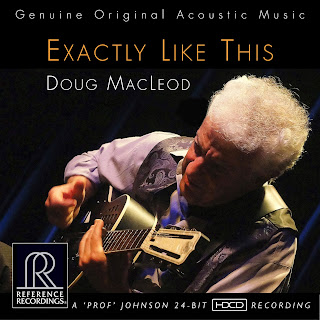 Doug MacLeod is a unique, powerful guitarist with a rich and soulful voice, singing original songs based on his own life and experiences

Doug MacLeod’s new album EXACTLY LIKE THIS is his third release with Reference Recordings. This is ‘Genuine Original Acoustic Music’ at its very best, in a richly detailed recording by Grammy-winning engineer Keith Johnson, made at Skywalker Sound in Marin County, CA.

In live performance, Doug MacLeod assures his audience “This song is going to go exactly like this.” It’s presented just for them, not a repeat of any performance he’s ever given or will ever give. He records the same way, each of his original songs are offered with a fresh voice. EXACTLY LIKE THIS contains eleven new MacLeod originals reflecting and paying tribute to some of his diverse musical influences: Louis Jordan, Wes Montgomery, Jerry Reed, Tony Joe White, John Lee Hooker, and even a little Duke Ellington. In his previous 19 studio albums, several live records, compilations, a blues guitar instructional DVD and a live performance DVD, MacLeod has consistently earned raves. His songs have been covered by many artists including Albert King, Albert Collins, Joe Louis Walker and Eva Cassidy. He has co-written songs with Dave Alvin and Coco Montoya. MacLeod’s songs have been featured in many TV movies and the hit show In the Heat of the Night. Two of his songs are on Grammy nominated albums by Albert King and Albert Collins.

Doug MacLeod isn’t just a blues guy, he’s a singer/songwriter/storyteller and serious guitarist. He is one of the few modern artists doing all original material and traveling the country like a troubadour. Just Doug, headed down the road in his Honda, baseball on the radio, Siri by his side and a trunk full of music!