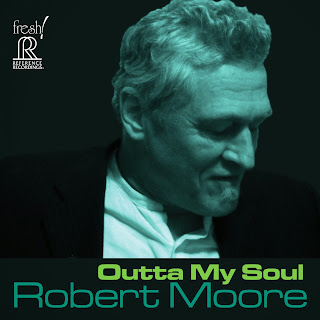 New to our Fresh! series is Robert Moore, jazz vocalist, composer, trumpet and harmonica player based in Portland. He has evolved a sound uniquely his own, mixing his Southern roots, influences of soul and gospel into his own distinct interpretations of bebop and swinging jazz.

Produced by Robert and recorded in high-res digital by innovative engineer Bob Stark, the album combines creative arrangements and outstanding performances by many of Portland’s best musicians in a wide variety of settings from two to twelve.

Moore started his singing career in a Southern Baptist church, and that early heartfelt gospel truth can still be heard in the soulful delivery of his music.

After stints as a public schools music teacher, he began his performance career, settling in Birmingham, Alabama. After 25 years there, he moved his scene to Portland, Oregon, finding a home and a following among the knowing jazz fans of that musically sophisticated city.

His music has steadily grown in depth, passion and honesty during his 60 years on the planet. Robert’s well-seasoned, finely-honed chops on vocals, trumpet, and harmonica are bringing joy to a wider audience than ever.