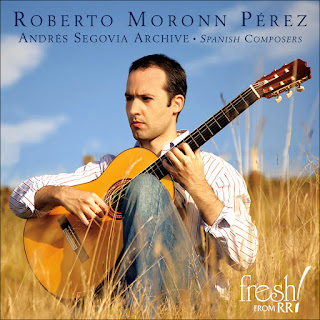 From the very first concerts of the 1920s Segovia’s approach in commissioning new music was very clear. As he was dealing with world renowned composers, he did not attempt to criticize the new works, he simply evaluated each piece in terms of its affinity with his own personal sound ‘palette. So, on the one hand, Segovia sant the praises of the Sonatina of Federico Moreeno-Torroba while he ignored the Sonatina of Cyril Scott (to give just two examples of works written in the 1920s and which were very similar to each other in form), nor did he in any way attempt to classify the new works in terms of those which he thought were better, but instead just preferred to opt for pieces which were more in keeping with his own style of playing. He chose the zarzuela, for instance, because of its spantaneity which he found lacking in the work by the ‘English Debussy’.

With the passing of time, two types of Segovian repertoire came to be established: music that Segovia played in concerts and recordings and music which remained ‘silent’ amongst his personal papers. It is important to remember that many of the compositions were the only manuscripts that existed at the time: composers gave Segovia their original copies and would wait to finalize them after he had made his comments and corrections. In this way, many compositions lay neglected; moreover, some of the se works were lost when Segovia fled to Barcelona in 1936 when the Spanish Civil War broke out as he was forced to leave a large quantity of his personal papers in his flat. When he subsequently found out that his flat had been ransacked, Segovia announced that he had lost the manuscripts but—it was later discovered—they had actually been salvaged by a relative. When he was re-united with the manuscripts in 1952, Segovia remained in possession of the Segovia Foundation of Linares and it was there that I was able to track them down. I subsequently published them in a collection entitle The Andrés Segovia Archive (Edizioni Musicali Berben, Ancona, Italy).

One of the first questions I asked myself was whether the ‘hidden’ repertoire in Segovia’s possession was somehow different from the repertoire which we know. In actual fact, it was clear the the differences were not to do with quality (in fact, some of these works appear to be musically superior) but with what did not quite fit in with Segovia’s own musical ideas—even though they might seem very interesting to today’s musicians. Listening to this CD we can glean answers to questions which guitarists have been asking for many years, questions which only Segovia could answer, but simply refused to.