We’ve been hinting at it for awhile now, but everything is in order and we can finally announce that we have available our very first multi-channel SACD release! 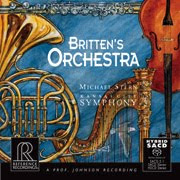 This production has garnered top notch reviews in more than 15 publications for the compact disc release – most recently in The Absolute Sound magazine:

“Britten’s Orchestra…is not only deeply satisfying on a musical level, but will also, I predict, become an instant ‘demo’ disc classic. Great music and great sound — now that’s my kind of ‘audiophile’ recording.” -Wayne Garcia

RR’s ROAD TO HIGH-RES MULTICHANNEL: Reference Recordings has a virtually unbroken history of making the finest possible high resolution recordings. We started with analogue tape. We were not satisfied with early technology, 16 bit digital recordings, but soon began making HDCD (High Definition Compatible Digital) recordings, in which the process was co-designed by our own recording guru Keith O. Johnson. In the opinion of many, these are the best digital recordings ever. Currently we record digitally at 176.4 kHz/24 bit, with HDCD. More than 20 of our masters were recorded both two-channel and multi-channel. RR’s master recordings are made using PCM, not the DSD which is the native format for SACD. For a long time, we weren’t satisfied with the sonic results of the conversion of PCM to DSD and so we did not make SACDs. New technological improvements now make that conversion much less of an issue. We’re excited to be making SACDs for fans of the format. Our first two releases (RR-906SACD and RR-71SACD ) were Two-Channel Hybrids. Now, this new release of Britten’s Orchestra will let music lovers and audiophiles hear our masters in full 5.1 Surround Sound for the first time! The Hybrid SACD also contains a stereo SACD version as well as a Compact Disc version, encoded with HDCD.

IMPORTANT NOTE: The SACD stereo and multichannel layers require an SACD player; the CD layer will play on any CD player.