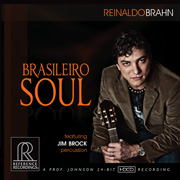 Just for fun, we wanted to do a re-posting, or “re-run,” of the blog from Tam Henderson after the Brasileiro Soul recording session. As we announced last week, Brazilian guitarist/singer/songwriter Reinaldo Brahn, along with percussionist Jim Brock, will be releasing Brasileiro Soul October 11. Since we orginally posted these photographs and reflections by Tam Henderson all the way back in February, we thought it would be good to bring them back to the forefront. So if you didn’t catch these the first time around, you can now! 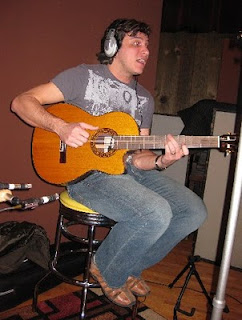 Most of last week, Keith Johnson, Sean Martin and I were in Charlotte, NC recording a new project at Reflection Sound Studios, scene of several RR past successes. The music is a new genre for us, featuring a talented young Brazilian singer-songwriter-guitarist, Reinaldo Brahn. The songs sound to me unusually rich and complex for “popular” music, with tasty arrangements for woodwinds, trumpet, electric guitar, keyboards (piano & synth), electric bass, drums, and a lot of exotic percussion by Jim Brock — who also produced. Even though most lyrics are in Portugese (one in English), the music has widespread audience appeal, and the sonics we got will ensure enthusiastic reception by audio nuts. I asked for an instrumental, for sake of variety, and the last morning Reinaldo wrote a new tune over breakfast. We all helped whip it into a fantastic shape. This will be played in what hi-fi salons remain, and at audio shows worldwide.