Reference Recordings at the Grammys Recap 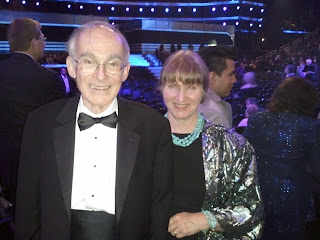 We had a great weekend, starting with attending the very moving Special Merit Awards ceremony (where Lifetime Achievement Awards, Trustees Awards, Technical Grammy Award, Grammy Hall of Fame awards etc. are given out). It was a thrill to see these legendary figures , including the beautiful Julie Andrews, accept their awards at the Ebell Theater on Saturday 2/12. There was an elegant Nominees reception there afterwards with terrific food.

On Sunday 2/13, we arrived at the Los Angeles Convention Center and walked down the famous red carpet, where Keith was photographed and interviewed. While Keith was waiting his turn at the microphone, the nominee in front of him got down on his knees, pulled out a ring, and proposed to his girlfriend right on camera! It was a big surprise. As you probably know, most of the awards are given during the day at the Pre-telecast awards ceremony. That is where they announced the one that Keith won. At that ceremony they gave out 96 awards, and his was ninth to be announced. After many nominations in the past, he was resigned that he probably wouldn’t win (again), so he was completely shocked and surprised to hear “And the Grammy goes to…Keith Johnson and David Frost”! He RAN up to the stage, just beaming, said his few words and rushed off the stage and on to about an hour of interviews, photos, videos, etc.

We had the world’s best seats in the 4th row at the telecast, and the show was great. Then on to the Grammy Celebration after the show where we ate and drank a bit too much- but we were really happy. A great time was had by all!

Here’s a video of the award: