Today marks the 100th Anniversary of Stravinsky’s Rite of Spring premeire at Théâtre des Champs-Élysées. Here’s a look back at our Stravinsky recording with the Minnesota Orchestra which features The Firebird Suite, The Song of the Nightingale, and The Rite of Spring: 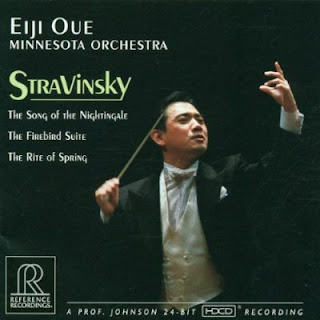 Stravinsky scarcely needed more than The Firebird to assure his fame, but he followed it with Petrouchka exactly a year later, and then, in 1913, delivered the ballet that caused a riot: The Rite of Spring, which premiered on May 29, 1913, under the baton of Pierre Monteux. Punches were thrown, umbrellas were brandished, and catcalls, whistling and booing threatened to drown out the clashing dissonances and fierce sonorities emanating from the pit of the Théâtre des Champs-Élysées on that historical night. The audience was caught off guard as the pounding, primitive rhythms violated every lyrical image of springtime and dismissed conventional notions of nature’s beauty. Ironically, when this work, subtitled Pictures of Pagan Russia, was presented in concert version a year later, the fury had already passed, and the composer was carried off triumphantly on the shoulders of the crowd. In little more than 30 minutes of music that captures the barbaric spectacle of ancient times, Stravinsky altered the course of music. Debussy, whose Jeux had created a stir of its own, was initially excited by what he heard, but when he saw how quickly a younger generation responded to Stravinsky, he felt betrayed and abandoned.

The initial impulse for The Rite of Spring struck the composer while he was finishing The Firebird. In his Chronicle, he describes his vision: “I saw in imagination a solemn pagan rite: wise elders, seated in a circle, watching a young girl dance herself to death. They were sacrificing her to propitiate the god of spring,” he described his dream-like inspiration to the impresario Serge Diaghilev, who, quick to perceive its potential for the ballet, encouraged him to get started right away. But not until the following summer — after Petrouchka was on the boards — did Stravinsky undertake his first sketches, collaborating with his friend Nicholas Roerich, a painter, archeologist and authority on the early Slaves. 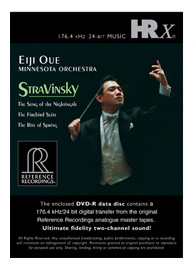 The composer declared himself in no position to judge the opening night performance, for at the first outburst of derisive hooting — already in the prelude — he left the auditorium in disgust to join Nijinsky (the choreographer) in the wings. He recalled in his Autobiography: “I had to hold Nijinsky by his clothes, for he was furious, and ready to dash on the stage at any moment and create a scandal. Diaghilev kept ordering the electricians to turn the lights on or off, hoping in that way to put a stop to the noise. … Oddly enough, at the dress rehearsal, to which we had, as usual, invited a number of actors, painters, musicians, writers, and the most cultured representatives of society, everything had gone off peacefully, and I was far from expecting such an outburst.”

Nowadays it may be hard — especially for those who first encountered Stravinsky’s violently syncopated rhythms in the sound track for the 1941 Disney film, Fantasia — to understand what all the fuss was about. That Stravinsky amassed a colossal battalion of instruments for The Rite of Spring would hardly seem daring after Wagner, Mahler and Strauss, but the way he used these forces was revolutionary, exploiting registers that formerly had been off-limits and combining seemingly incompatible timbres. Promoting the percussion to equal status with other sections of the orchestra, he unleashed a battery with a vengeance, for rhythm governs the work. Coupled with clashing keys and aggregate dissonances, the barbarism that was shocking at the beginning of this century still seems surprisingly modern at its close. …

— Taken from the Stravinsky liner notes by Mary Ann Feldman

Some quotes from reviews from the original CD:

“This HDCD has more detail than any live performance I have attended. The orchestra and the hall sound simly glorious. Put it on, sit back, and be amazed!” –BOB LUDWIG, Stereo Review

“There is no finer orchestral playing among American orchestras…Bravissimos are due to all concerned…a triumph of artistry, both musical and technical.” – Heuwell Tircuit, InTune magazine

Purchase the recording direct from Reference Recordings in the following formats: