In January we will be releasing another new Reference Recordings Mastercuts LP — Rachmaninioff! 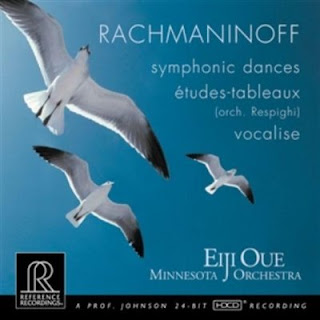 Selected by SoundStage!.com as one of the “Best Recordings of 2001”

Chosen by THREE reviewers of The Absolute Sound magazine as one of the best releases of 2001.
Sergei Rachmaninoff was one of the most beloved composers of the twentieth century. His music is redolent of his Russian homeland, and it sings long, lush melodies that define the term “romantic.” Everyone who knows and loves his piano concertos will enjoy these lyrical and dynamic works for orchestra. The “Symphonic Dances” in recent years have become one of Rachmaninoff’s most-performed scores. The five “Ètudes-Tableaux” were orchestrated by Ottorino Respighi from the brilliant originals for piano. “Vocalise” is one of the great classical melodies, and is hummable by everyone. Initial response from renowned reviewers is amazingly positive. Two have said this is the finest orchestral recording RR has ever made!

Read the Many Review Quotes Here! 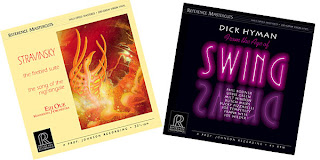 In the January 2012 issue of The Absolute Sound Magazine, Harry Pearson wrote about our first two Mastercuts LPs. Here are some great quotes from his “HP’s Workshop” column:

“Reference Recordings’ recent re-entry into the LP market was big news… The RR team could not have picked a better album to start with than the Stravinsky. Eiji Oue’s Minnesota musicians play the Song of the Nightingale as well as the Chicago did under Reiner in the legendary Living Stereo issue, and with, to these ears, considerably more tenderness and poetry than Reiner got from Chicago. Incredible? Ah, listen for yourself…..Keith Johnson’s recording is his very best of all that I’ve heard him do…. Johnson has captured a unified soundstage that is most coherent in depicting layered levels of space fore and aft, each with its own dynamic truth. It is amazing to hear instruments, some quite delicate, playing deeper in the soundstage with as much dynamic realism in their range of contrasts as the louder instruments closer to the lip of the stage…There are some transient bursts on the LP that will make you jump, so great and unstrained are they.”

Purchase the first two Mastercut LPs and the Rachmaninoff CD at ReferenceRecordings.com and save 20% on your entire order during our Holiday Sale!