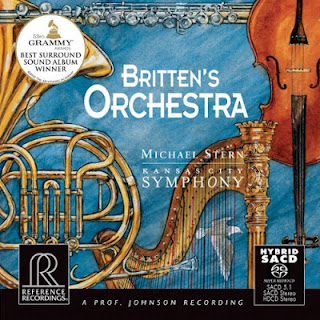 Sanch Electronix director Simeon Sandiford (who we introduced here) published a wonderful account from “The World’s Best Audio System” 2012 convention in North Carolina, and in his wonderful chronicling, he takes readers inside the “Music Vault,” where he lends this account of listening to RR’s Britten’s Orchestra SACD on a system with Magico Q7 Loudspeakers:

“…I (Simeon Sandiford) asked (Tim) Crable, who was manning the console, to regale us with Britten’s The Young Person’s Guide to the Orchestra. This is the first track of Britten’s Orchestra, with the Kansas City Symphony conducted by Michael Stern, produced by David Frost (SACD/CD, Reference RR120). It won the 2011 Grammy for Best Surround Sound…

“There were seven of us in the room at the time. The others sat comfortably at or symmetrically to either side of the sweet spot. For the 17 minutes and nine seconds of the work, no one moved, fidgeted, coughed, or was otherwise distracted. We all became part of an exotic experience: recording engineer Prof. Keith de Osma Johnson’s perfect facsimile of what had transpired in the Community of Christ Auditorium, in Independence, Missouri, on June 5 and 6, 2009. What transpired was probably the best demonstration of the seating arrangements of the four families of instruments of a full symphony orchestra that I have experienced in more than 50 years of dedicated listening.

When Crable whispered, “Simeon, don’t you think that this recording is biased toward the left side of the soundstage?,” I quickly replied, “Tim, emphasis is now being placed on those instruments in the orchestra that are located precisely there.” Then came the fugue on the main theme, in which all four orchestral voices bellow in unison in the tumultuous climax. Jeff’s Music Vault shuddered, and Crable instantly became, once again, a happy, satisfied audiophile.