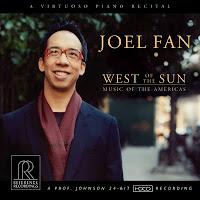 In their excitement for Joel Fan’s performance with the Las Vegas Philharmonic on November 21st, Las Vegas Weekly did a feature with our artist Joel Fan that we thought we’d share with you:

What attracted you to “Concerto in F,” and how does it fit in with the rest of your concert and recorded repertoire?

My [2009] album West of the Sun is a unique look at music from the Americas, both North and South, and my recital programming this season also reflects that. So playing the Gershwin concerto fits in with that theme. Most important, it is a fantastic work, well written and fun to play.

Is there a common element to the “new-world” composers West of the Sun highlights—some familiar, like Heitor Villa-Lobos, and some less so, like Margaret Bonds—that distinguishes them from their European counterparts?

I think that the new-world composers bring European compositional techniques and forms, but with a focus on source material from their local cultures. For example, Villa-Lobos based his piece on a Brazilian folk song called the modinha [a melancholy love song], and it is written in a typical classical-music form [ABA]. Bonds bases “Troubled Water” on the Negro spiritual “Wade in the Water”—but structurally, it is a theme and variations.

The dire-sounding compositions of the serialists and other contemporary composers chased many classical-music lovers out of the concert halls. Are today’s audiences more adventurous, or have the new composers found a new way of connecting with them?

I think that the current generation of composers has found a great way of being accessible, while also being intellectually stimulating. For example, I’m performing a piece in Washington, D.C., by Derek Bermel called “Five Funk Studies” the week after my performance in Las Vegas. This piece sounds jazzy and is accessible, yet has great compositional technique. There are many other contemporary composers who also write music with both integrity and accessibility, including my late teacher, Leon Kirchner.