Why Dances in Opera? Exploring “Exotic Dances from the Opera” Mastercuts LP 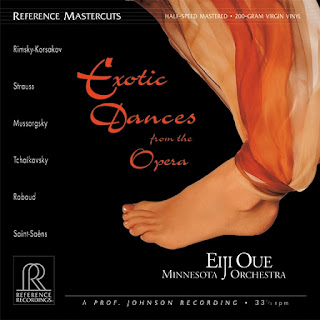 As we approach Tuesday’s official release of our Exotic Dances from the Opera LP, we wanted to explore the reasoning behind focusing on dances within opera. Dance and Opera have an incredibly intertwined history and relationship, so much so that in periods throughout history it was an expectation to have a sections of ballet take up significant portions of an opera. To explore this relationship, and the reasoning behind the unique programming, take a look at an excerpt from the original Exotic Dances from the Opera liner notes, as author Mary Ann Feldman offers some background into the shared history of these two art forms:

Because opera unites the arts, it has always been the most ravishing and extravagant entertainment. And from the very beginning of operatic theater, which is rooted in the choral dances of the Greeks, the spectacle of dance has commanded a significant place in the opera house, whether integrated into the drama or offered as a casual diversion.

Ballet, the older art of the two, has played its role in opera ever since nymphs and shepherds cavorted on the Baroque stage. Conditioned by Jean Baptiste Lully, the guiding spirit of the dance at the Court of Louis XIV, and later by Rameau, operagoers in France expected dance as a matter of course. In the following century, the Paris Opéra observed an unwritten law that the second act of an opera must feature a ballet episode. Even Wagner was forced to obey this stricture. The fusion of opera and dance peaked in the nineteenth century, whose repertoire has generated this collection of exotic pieces—both familiar and obscure—but each capable of standing alone as an orchestral experience.

Pre-Order Your Exotic Dances from the Opera LP Today!