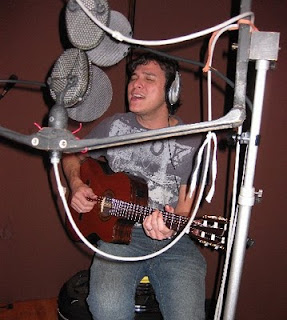 Our newest release Brasileiro Soul comes out tomorrow (10/11), so we wanted to take today to introduce you to featured artist Reinaldo Brahn.

Born in the third largest city in Brasil, Belo Horizonte (Beautiful Horizon), Reinaldo Brahn picked up his brother’s guitar at age 14, curiously strummed its chords, and the musician within him immediately emerged. He initially taught himself traditional Musica Minhera, rhythms of his native state Minas Gerais, and in subsequent years, further expanded his musical repertoire by playing at festivals, bars, and restaurants. Traveling through various towns and cities, Reinaldo’s experiences and collaboration with other musicians taught him the fundamentals of his signature style, which infuses classic Brazilian rhythms – Funk, Sambas, Bossa Novas – into his own unique sound. He produced a CD in 2000 with “Web Brasil”, a Brazilian band, and was featured in a collective artist CD in 2004 called “Poucas e boas – au vivo no Tocos”.

Reinaldo came to Charlotte, NC in October of 2007 and quickly began to introduce his Brazilian roots to the Charlotte music scene. He creatively applies the robust Brazilian style to popular American music with a result that’s truly inspiring. Reinaldo’s specialties include singing and playing Brazilian music, including popular MPB and classic Sambas, as well as performing popular American songs with a strong Brazilian influence.