Audiophile Audition reviews From the Age of Swing LP 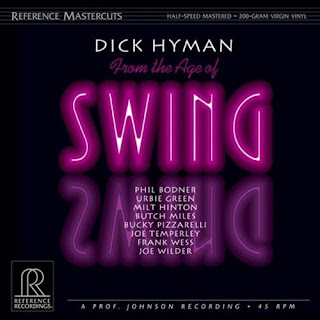 Audiophile Audition has a Five-Star review of RR Mastercuts LP release of Dick Hyman’s From the Age of Swing.

“This collection of music from small and large instrumental groups from the late 1930s was originally released on CD by Reference Recording in 1994. It’s great now to have it on the ultimate analog format of 45 rpm vinyl—well worth the expense for those of us with high-quality turntable systems.

“Of course the original tapes are the very best, from engineer Keith O. Johnson – recorded originally in the Concert Hall of SUNY in Purchase, New York. They were transferred to 176.4K/24-bit digital to cut the master for the vinyl.

“Hyman’s Baldwin piano comes thru cleanly on all the tracks, and the sometimes five-strong front line of reeds and brass often creates a larger sound than one would expect from just nine players.

“Sonics are, of course, fabulous, and getting up frequently to change sides didn’t seem as annoying as with classical material at 45 rpm. Part of this was due to Reference Recordings putting a bit more time on each side than the only seven or eight minutes on most audiophile 45 rpm 12-inchers.” – John Henry, Audiophile Audition

Purchase the From the Age of Swing LP directly from Reference Recordings!