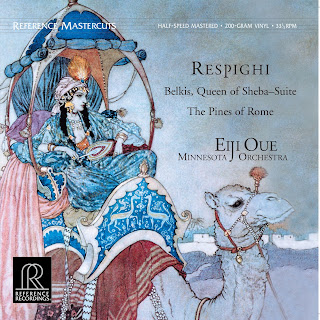 “A pair of lavish Technicolour tone poem creations from Respighi—one extremely well-known and up against much competition, and the other only the second recording of the rare ballet suite. In Pines of Rome, Eiji Oue brings out all the wild tonal colours and passion of the composer’s widescreen musical extravaganza, using extra brass and a pipe organ to do so. Belkis did not do well for Respighi, so he started on condensing the music to a more manageable size, but died before he completed the task. We have four movements here. The orchestration is fantastic and the impressive sonics are demonstration quality. (For which Engineer Keith O. Johnson earned a Grammy nomination for Best-Engineered Classical Album.)” —John Sunier