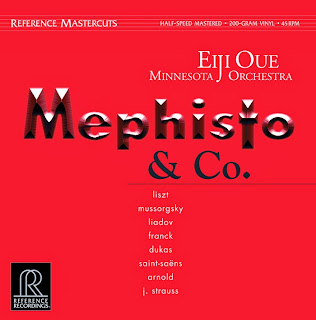 “This is a collection of eight variously daemonically-influenced shorter orchestral favorites, ranging from not quite three minutes to twelve minutes. It got reviews calling it superb when it first came out in 1998 as a CD. Now Paul Stubbleine has remastered it and the double 45 rpm pair were pressed at QRP and they include a huge amount of notes printed on the two inside surfaces of the double-fold album. … There are number of recordings of most of these pieces, but the Minnesota Orchestra and Oue really seem to play up the dramatic aspects of all of them to a high degree and compete with … more audiophile-oriented sonics…” —John Sunier, Audiophile Audition