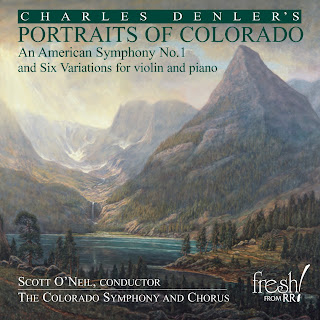 OurColoradoNews.com has a wonderful profile of Charles Denler and his Portraits of Colorado recording. We’ll share some of the quotes here, but highly encourage you to read the full interview!

“Denler’s “Portraits of Colorado” — inspired by the artwork of Jerry Malzhan — is written in 10 shorter movements, as opposed to the traditional three, to appeal to the iPod generation. It will debut with the Colorado Symphony May 31 at Denver’s Boettcher Concert Hall.

“It’s a passionate symphony not only about Colorado, but it’s really a symphony about overcoming the odds and overcoming hardship, and finding hope even in the midst of the storm,” Denler said. “We all know that life is hard, and on some people it’s harder than others. This symphony is about celebrating new beginnings and fresh starts.”

“The story of how Denler came to write “Portraits of Colorado” will also be featured later this summer on PBS in a documentary by award-winning filmmaker Steve Greisen, called “An American Symphony.”

“The documentary will explore the motivation behind the symphony and flash from Malzhan’s paintings to the locations that inspired them, and will feature interviews with the composer and artist as well as live footage of the May 31 performance.” — Ryan Boldrey

Read the full interview on ourcoloradonews.com!

Order During the End of Summer Sale and Save!