Charles Denler’s PORTRAITS OF COLORADO, An American Symphony No. 1 wsas inspired by a sunrise over the Rocky Mountains and the incredible works of American Painter, Jerry Malzahn. Meet the artist behind inspiration below: 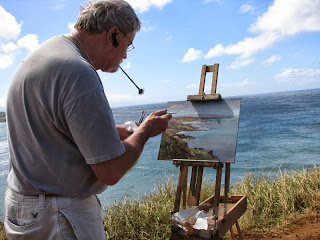 Jerry Malzahn, a talented landscape artist, was born in Stuttgart, Arkansas on september 30, 1946, moving to Texas as a young adult. He earned a Bachelor of Arts degree from the University of North Texas and founded Malzahn Landscape Company where he currently serves as president.

In 1994, at the age of 48, Jerry began to devote himself to landscape painting. He garnered enthusiastic and immediate response by collecting first place prize for landscape paintings for landscape painting with figures at the l996 Texas State Fair. Jerry displayed his art in two successful shows at the Wild Gallery (1996) and David Dike Fine Art (2003) in Dallas. In 2003, he was selected for member- ship into the prestigious Salmagundi Club in New York, New York. In 2005 the city of Richardson, Texas held an exhibit of Jerry’s paintings along side the personal collection of Jerry and Lyla. The paintings included works by Asher Durand, Diaz de la Pena, Julian Onderdonk, and William Keith along with selected landscapes by Jerry. The Exhibit was covered by American Art Review and was viewed by over a thousand visitors. Jerry’s landscapes are displayed in important private, corporate and public collections in Dallas and Ft Worth, Texas, New York, New York, and Annapolis, Maryland at the U.S. Naval Academy Museum. In 2008 Jerry was selected to paint a Christmas ornament for the White House Christmas Tree. It was a humbling honor, and Jerry and Lyla were excited to attend the reception hosted by the First Lady, Mrs. Laura Bush in the White House.

Read more about Mr. Malzahn, and view pictures from his collaboration with Charles Denler at www.malzahnart.com!