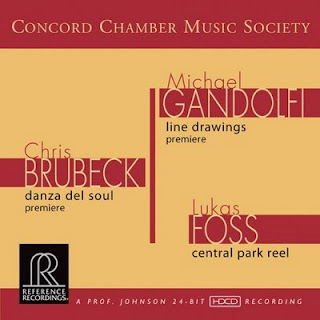 “Featuring two recordings from two of America’s most-commissioned composers and one recording from the fascinating Lukas Foss, the Concord Chamber Music Society’s release of Chris Brubeck and Michael Gandolfi’s Danza del Soul and Line Drawings, respectively, is a captivating and lovely release. All of the pieces were recorded at Mechanics Hall in Worcester, Massachusetts.

“Danza del Soul…becomes increasingly spirited as it revels in the tongue-in-cheek “dance of the sun,” springing about as it does with personality and drive. The final frame takes on a life of its own with Bauch’s percussive mastery and Putnam’s sassy violin.

“[In Line Drawings] The sound is immediately lavish and the acoustics of Mechanics Hall very nearly add a fourth player. Gandolfi, who began his musical adventures with rock and jazz improvisation, drew inspiration from Pablo Picasso and the larger spirit of his works. That is apparent as the instruments tap around the Hall, kissing the building with life and assurance.

Read the Full Review on www.BlindedBySound.com