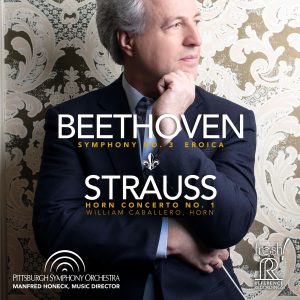 “The new release in the Pittsburgh Live! series is a revelatory performance of Beethoven’s Symphony No. 3 in E-flat major, Op. 55 by Manfred Honeck and the Pittsburgh Symphony Orchestra. … As he does with every work he performs, [Honeck] has dissected it with surgical precision to massage the dynamics, sometimes even within a single bar. And, as usual, he puts his own stamp on the symphony with some added surprises…I dare anyone to listen to this recording and not feel compelled to move with the music. Each movement builds momentum to glorious conclusions. … The second piece on the disc is the Horn Concerto No. 1 in E-flat major, Op. 11 by Richard Strauss. The horn solo is played to perfection by the principal horn of the PSO, William Caballero, who also opined about the work in an interview with Honeck in the liner notes. In the concerto, Honeck defers to Caballero who moves seamlessly from smooth piano playing to powerful forte playing. … As with the other Pittsburgh Live! series recordings by Honeck and the PSO, this one sounds fantastic! They’re not kidding when they call it Live! because the sound jumps out at you as if you were sitting right in front of the orchestra in Heinz Hall in Pittsburgh, where it was recorded. This recording is a tour de force and stands among the great sound recordings of Beethoven’s monumental symphony.”