Fanfare Magazine critics can’t get enough of the Pittsburgh Symphony Orchestra. Raymond Tuttle wasn’t the only critic with a Pittsburgh Live! release on their year-end “Want List”: 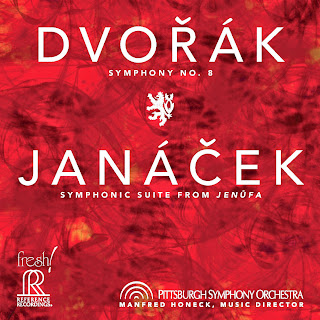 “Under music director Manfred Honeck, the Pittsburgh Symphony Orchestra is increasingly recognized as an ensemble to reckon with. It’s our good fortune that an audiophile label, San Francisco’s Reference Recordings has, so far, released two SACDs from the PSO. (The other is a Richard Strauss program.) The audio production here isn’t the work of RR’s in-house talent but rather the top-notch Boston recording company Soundmirror, and the sonic results are impressively transparent. In addition to a propulsive and thoughtfully structured account of Dvořák’s Symphony No. 8, there’s also an effective synthesis of music from Janáček’s Jenůfa, “conceptualized” by Honeck and actually written by the contemporary Czech composer Tomáš Ille.” —Andrew Quint

“For the second year in a row, my list includes Dvořák’s Eighth Symphony, a particular favorite of mine. This time the work is presented in a powerhouse performance by Manfred Honeck and his stellar Pittsburgh band captured in Reference’s usual state-of-the-art sound.” —Merlin Patterson 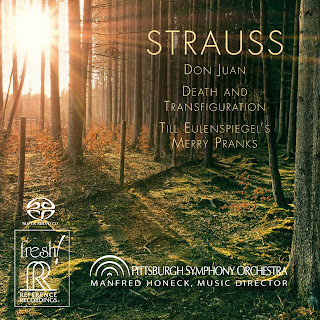 It’s a bit harder to make a similar impression with the canonical tone poems, in part because they have an even stronger discography than the operas—but Manfred Honeck’s ear-opening collection from Pittsburgh (Till, Don Juan, and Tod und Verklärung) reminds us that there is still plenty of musical nourishment in what might seem to be depleted fields. Engineering, too, is state of the art.” —Peter J. Rabinowitz

Buy BOTH Direct from RR!