Reference Recordings is thrilled to present the next LP release in the Reference Mastercuts series: 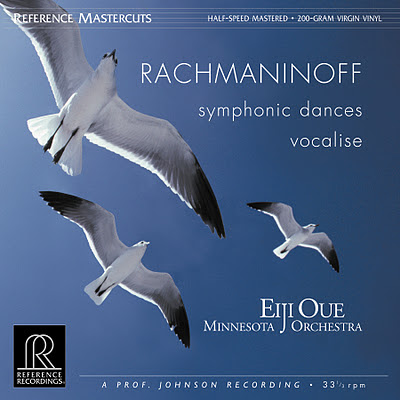 We will showcase this and other recent RR Titles at THE Show, January 10-13, The Marketplace, Flamingo Hotel, Las Vegas. Please visit if you can!

A few of the dozens of reviews of this recording (original CD release) are quoted below!

“Picked by THREE reviewers of The Absolute Sound magazine for a GOLDEN EAR AWARD (best releases of 2001):

“Even by the exalted standards one has come to expect from Reference Recordings, this is something extraordinary. . . This is the kind of recording that gives one renewed faith in the possibility of reproducing the power and beauty of an orchestra in a home environment, the kind of thing that makes audio worthwhile. Not to be missed.” — Robert E. Greene, TAS

“Keith Johnson’s HDCD recording captures the sound of Orchestra Hall with stunning impact. Like the best EMI recordings of the 1960s, the musical and technical qualities of this release are linked inextricably to its success. Quite a remarkable achievement.” – Lawrence Vittes, GRAMOPHONE

“The playing by the Minnesota Orchestra is simply stupendous: tremendously unified ensemble, immaculate balances that let you hear all the important lines, and a palpable sense of enjoyment from the players (those trumpet players rule!).” –Victor Carr, Jr., ClassicsToday.com

“I must admit to a thrill when RR packages arrive at the office. . . Once again, Keith Johnson has raised the bar of excellence in the recording of a symphony orchestra. . . It’s a fabulous recording and a super performance of the SYMPHONIC DANCES, and a testament to the brilliance of Keith Johnson and his associates.” — Anthony Kershaw, Audiophilia.com

“Other versions I know . . . lack the energy, excitement, the involvement and conviction of Eiji Oue’s performance. Keith Johnson’s engineering, mastering and production have, in this case, produced the finest orchestral recording I have ever heard. It is instantly among that handful of CDs I will carry with me to audition sound systems, or that I will play to show off my own. Listening to this recording is one of those exultant musical experiences that will remind you why you got into the audiophile game in the first place.” — Russell Lichter, Soundstage.com