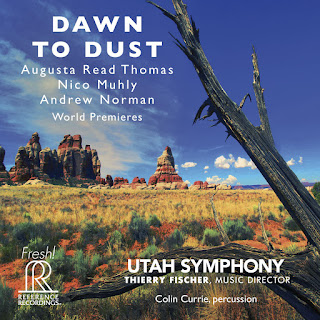 “The inspired players excelled in an ambitious program that featured the New York premiere of Andrew Norman’s ‘Switch,’ one of several recent Utah Symphony commissions. … ‘Switch’ explores nonlinear, narrative-scrambling techniques borrowed from video games. His restless music gurgles and explodes in often fragmented phrases, leaping breathlessly from one thing to another.

‘Switch’ actually begins calmly, until slicing chords startle you. Only after the piece had been going for a minute or so did the percussion soloist, Colin Currie, sneak onstage and pick up mallets. The piece unfolded with bouts of frenetic activity, volleys of percussion and gnashing chords. As the title ‘Switch’ suggests, the soloist’s riffs are like triggers, turning other players on and off, including other percussion in the rear.

This technique of quick cuts could easily result in just jumbles of sounds and rhythms. But the pitches Mr. Norman piles up came across as precisely chosen for their astringent beauty and impact. Also, stretches of subdued, if taut, music provided relief from the frenzy. Mr. Currie brought stunning virtuosity and tireless energy to the solo part, which required him to dash constantly among groups of instruments onstage.” —Anthony Tommasini, The New York Times

See the full review on NYTimes.com