The Utah Symphony, which opened Carnegie Hall’s 75th anniversary season, returns with Music Director Thierry Fischer to celebrate its own 75th anniversary. Colin Currie performs the New York premiere of Andrew Norman’s Switch on a program that opens with Haydn’s cheerful Symphony No. 96, “The Miracle.” The night closes with a performance of selections from Prokofiev’s Romeo & Juliet and Bartók’s adventurous Suite from The Miraculous Mandarin.

The Utah Symphony has been rebuilding under Mr. Fischer, who was appointed music director in 2009. He has hired more than 30 musicians, a change that has not been without tensions, and recently named a new concertmaster, Madeline Adkins. The ensemble is wrapping up a Mahler cycle and released a recording of that composer’s First Symphony last year, following it a few weeks ago with an album of works it commissioned by Augusta Read Thomas, Andrew Norman and Nico Muhly. Friday’s concert at Carnegie includes the New York premiere of Mr. Norman’s percussion concerto “Switch.”

“…the [Utah Symphony] can take pride in how it has blossomed under its new music director, Thierry Fischer — just in time for the current 75th anniversary season. An ambitious overhaul of personnel and programming is bearing fruit, as evidenced by an excellent new recording of commissioned works by Nico Muhly, Augusta Read Thomas and Andrew Norman.” 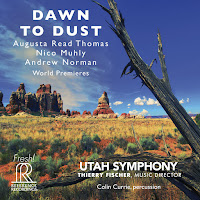 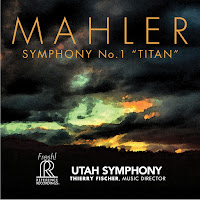