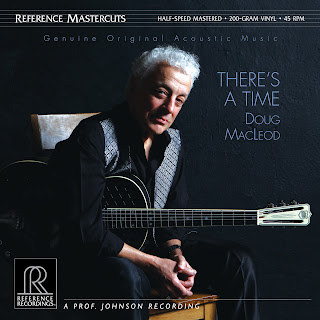 Also featuring Doug’s longtime bassist Denny Croy and Jimi Bott, one of the most recorded, awarded and respected blues drummers in the world.

Doug says: “Making this album was different than any other one I’ve done in the past,” recalls MacLeod about the sessions. “They put Jimi, Denny and me on this huge soundstage at Skywalker Sound in Marin County and we sat around in a circle where we could see each other. We played live, no overdubs, just three guys playing some music together.”

A perennial Blues Music Award nominee, MacLeod was nominated in 2012 as Acoustic Artist of the Year. (Drummer Jimi Bott is also a multi-BMA nominee).

REVIEWS of the CD version:

Stereophile Magazine: Editor’s Pick Recording of the Month (May 2013).
“…impeccable playing, impassioned singing, and his engaging personality shines forth in a live setting. It all makes for a very enjoyable if very traditional experience.” —Robert Baird, Stereophile

“On guitar, he strums and slides through an apocrypha of alternate tunings played on a rich chase of classic six and twelve-strong acoustics. This master storyteller has a knack for exploring the space between the notes, delivering quiet, thoughtful asides and blues sermons, sometimes saturated in Jack and Coke or steeped in swampy mysticism of the Delta blues tradition.” —Greg Cahill, The Absolute Sound, June 2013 Issue

“There’s A Time continues the long history of blues as a story-telling medium, an art form that Doug MacLeod has mastered with literary integrity and serious blues feeling.” —Frank Matheis, Living Blues, April-May 2013

“MacLeod reminds us of the shared roots of blues, jazz, and folk music. And here on his 19th studio album, he does it in a way that makes you want to pay attention.” — Rick Allen, Vintage Guitar Magazine. June 2013 Issue